1 WSPÓŁPRACA MIĘDZY JEDNOSTKAMI SAMORZĄDU TERYTORIALNEGO Ms
WSPÓŁPRACA MIĘDZY JEDNOSTKAMI SAMORZĄDU TERYTORIALNEGO Ms. Gunn Marit Helgesen, President, KS Undersecretary of State - Mr Orłowski, Director of the Association of Polish Cities -Mr Porawski, Dear colleagues Thank you very much for the invitation to participate at the inaugurating conference the EEA grants Regional Program. This was the first programme of all EEA grants signed in Oslo in April and now – the first to launch. Congratulations to all who has worked with the preparation of this programme. As the focus of the programme is intermunicipal cooperation, I will give you a taste of Norway when it comes to this topic: why we do it, how we do it and what challenges we have. KS Omstilling og konkurranse

2 Wyzwania przed jakimi stoimy w Norwegiii
Wzrastające oczekiwania i potrzeby wobec programów społecznych Brak wykwalifikowanej siły roboczej w gminach Wzrastające kompleksowość zadań realizowanych przez gminy Niewystarczające finansowanie Wszystkie gminy w Norwegii mają te same obowiązki – bez względu na wielkość i położenie So – why we do it? First of all, demographic development in Norway with agening population and decreasing number of people in the active labour market, challege our way to organise delivery of welfare services. We have to cooperate across the sectors, municipal boundars and between the levels of government in order to meet incresed expectations and needs in the welfare sector. Access to qualified labour force linked to increased needs and incresed complexity of municipal tasks, will be a critical factor in the years to come. There already is competion (and the competition is going to increase) between the public and private sector and between different areas in public sector. Municipalities have to compete to attract qualified people. cooperation will be a good alternative how to meet this challenge. Increase in needs and complexity of services has not been followed by increase of municipal budgets. Norway has about 5 million inhabitants. Both municipalities and counties vary significantly regarding size, topography and population. More than half of municipalities have less than 5000 inhabitants. The largest city Oslo is about people and the smallest – Utsira – about 200. Despite such differences, all municipalities and all counties are given most of the same rights and responsibilities. The question arises whether the generalist municipality is strong enough to cope with the challenges of today and tomorrow. How can small Norwegian municipalities, lacking financial and human resources, deal with all these challenges? KS Omstilling og konkurranse

3 Współpraca And the answer is cooperation. To cope with the situation municpalities have to cooperate - combine resources, provide higher quality services and take advantage of economies of scale. We have to mobilise expertise, find solutions and attract investments across the municipal borders. And I would dear to say that we are the champions of inter-municipal cooperation. As the research shows - extent of cooperation varies among municipalities. There are about 11 cooperation agreements or forms of cooperation in average per municipality. The latest research report from this year, done in the Northen Trøndelag county shows that number of cooperation varies from 27 to even close to 56 per municipality. Four municipalities that makes Midtre Namdal co-municipality, represented here today by one of them - Ms.Bjørg Tingstad, mayor of Fosnes municipality - is on the top of the list with about 50 cooperation arrangements. I will leave to the Mayour to tell herself about their experiences. I will mention the types of intermunicipal cooperation in general. KS Omstilling og konkurranse

4 Współpraca międzysamorządowa w Norwegii
Formy organizacyjne współpracy: Rady regionalne Międzygminne przedsiębiorstwa komunalne c) Międzygminne spółki kapitałowe Przekazywanie zadań przez jedną jednostkę inne jednostce samorządu „Co-municipality” – „wspólna gmina” Regional councils are operative political type of cooperation between municipalities. Cooperation is formalised by statutes or agreements but it is not defined by any specific law. Regional councils are working on regional development issues, branding of the regions and very often it serves as a starting point for establishment of more binding cooperation solutions. This is the most popular type of cooperation. As for today we have about 70 such regions. Only 14 municipalities do not participate in any of them. Number of participation municipalities can vary from region to region. They may strech over the boundaries of one county. Inter-municipal companies are established under the Law on intermunicipal companies (from 1999). The owners can be only municipalities, counties and other intermunicipal companies and the owners have full responsibility on the obligations of the company. Public limited companies are established under the Law on joint stock companies and the owners can be muncipalities, counties, state and private entities. Both types of companies are establish to develop activities of economic interests. From 2007 Local governement Act opened for possibilities to cooperate on the services which are local governement responsibily by law and has features of exercising the authority. One or several municipalities can delegate responsiblity for delivering of a service to the host municipality. This cooperation can be only either between municipalities or between counties and decisions can be taken either by administration or the board of politicions from all participating municipalities. Co-municipality model until this year has been exercised under our Experiment act (as we simply call it) but starting with from under a Co-municipality act. This means that particiapting municipalities establish a new legal entity and inhabitants have to interact with this new co-municipality on the services which are covered by the agreement. Mayor from Fosnes will elaborate more on this issue as they are one of few in Norway practising this type of cooperation. KS Omstilling og konkurranse

5 Ustawa o Pilotażowych Programach w Administracji Publicznej
Cel: Wypracowanie funkcjonalnych i efektywnych form organizacji i współpracy między jednostkami samorządu terytorialnego Król Norwegii (Rząd) może zaaprobować: Inną formę organizowania i realizacji zadań publicznych przez jednostki samorządu, niż określono w ustawach i rozporządzeniach Inny podział zadań między rządem, powiatami i gminami Inne niż obowiązujące powszechnie rozwiązania w zakresie monitoringu realizacji zdań Ograniczenia: Fundamentalne zasady Ustawy o Samorządzie Terytorialnym Kluczowe procedury z Ustawy o Samorządzie Terytorialnym Procedury które zabezpieczają prawa pojedynczych obywateli I heard that you are curious about our Act on Experiments, as we in speaking language call it. The Norwegian title of this act defies translation into english….. In norwegian a direct translation of “forsøk” would be something like “trying something out” or experimenting - which actually describes the intention very well – but it would’nt sound very good in a title of an act, so the title is slightly more formal…. The purpose of this Act is through pilot schemes to develop functional and efficient forms of organisation and operation in public administration, and an appropriate division of duties between public administrative bodies and between public administrative levels. Particular weight shall be placed on improving the public provision of services to citizens and on bringing about the best possible use of resources. In the case of a pilot scheme that includes any popularly elected body, weight shall also be placed on the promotion of good democratic forms of government. The government has the power to approve applications for pilot schemes. What has to be approved is the deviation from existing/current acts and regulations. Approval may be given for a four year period. It may be prolonged for two years. When the evaluation is positive, and it is planned or has been decided to implement reforms in accordance with the pilot scheme, the period may be prolonged until the reform comes into effect. As the slide shows, the King is not free to approve any deviation what so ever; it is positively defined in the act which deviations from existing rules that can be accepted. And in addition it is explicitly stated that deviations from rights and duties for private individuals can not be approved. To replace the provisions from which deviation is approved, there shall be issued further rules for the conduct of the individual pilot scheme. These rules are laid down through bylaws (norsk: vedtekter) which shall be subject to the approval of the King. Applications to carry out pilot schemes that has been approved on the basis of this act: Directly elected mayors. (According to the local government act the mayor is elected by the municipal council. ) Unitary county: Integration of the County (publicly elected) and the County governor (state representative at regional level).

6 Kryteria sukcesu Stworzenie „miejsca i powodu” do spotkań
Posiadanie i podzielanie wspólnej wizji Strategia Dobre projekty z realistycznymi i oczywistymi rezultatami Koncentracja na wdrażaniu projektów Oszczędności wynikające ze współpracy pojawiają się dopiero z czasem Zaufanie, konsensus i wzajemność jako wiodące zasady As each relationship, also intermunicipal cooperation, needs some «investment». It is important to use time and good materials for the foundation when we build the house, so it is with cooperation as well.We need good and open discussions about the goals of cooperation and which type and model suits us best. In order to reach this common understanding we can use electronic means, but we also need to meet with colleagues physically. It takes time to reach commitment for the joint vision, to work out strategy and work plans. Choise of good cooperation projects with obvious and realistic results is very important. Agreements with clear roles and responsibilities, rutines and procedures help a lot both in good and bad times. But as all cooperation - it is about relationship between people. It is about trust, respect, consensus and mutuality. And WILL. Without will to find joint solutions, will to invest in the cooperation and will to accept and tolerate our partners, would be difficult to establish well functioning cooperation. KS Omstilling og konkurranse

7 Wyzwania jakie stoją przed nami w Norwegii:
Demokratyczna kontrola w ramach jednej jednostki samorządu a podział odpowiedzialności między partnerów - wyzwania: Decyzyjność – efektywność w podejmowaniu decyzji Lepsze wykorzystanie środków Lepsze wykorzystanie zasobów ludzkich The challenge of inter-municipal cooperation is increasing distance between the inhabitants, councillors and staff delivering the services, which can diminish the councillors’ ability to see the coherence between the service sectors. Challenges occur when a service sector that has traditionally been under the full control of the local government, becomes a Public limited Company: The local government’s possibility for direct influence regarding priorities in the company will be decreased. Another challenge: It will create a mix of roles – ethical dilemmas have to be discussed and roles will have to be clarified. As you can see – every solution has some positive and negative sides. I hope this programme will give you a possibility to find your own solutions. KS and Norwegian municipalities will be happy to share our experiences, failures and success stories. Thank you very much for your attention! KS Omstilling og konkurranse 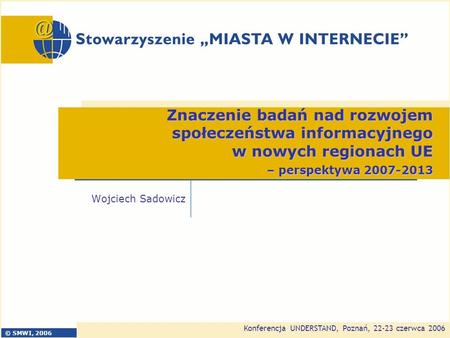 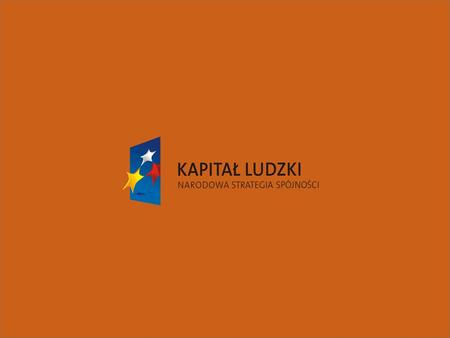 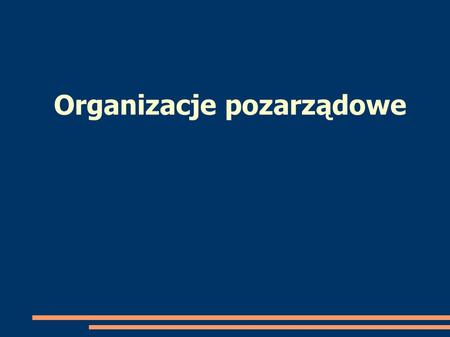 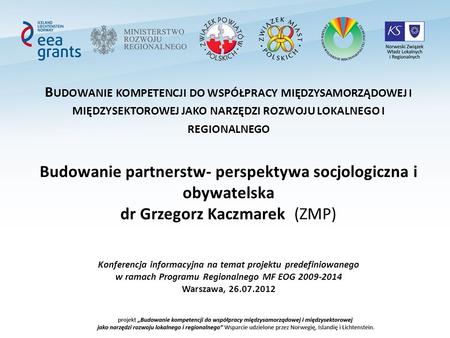 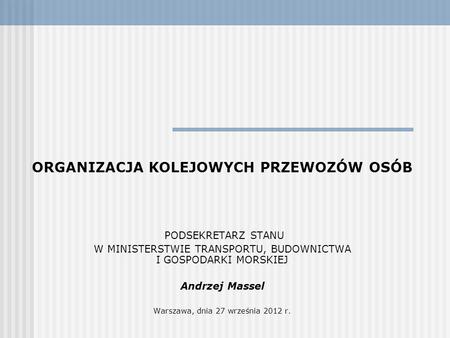 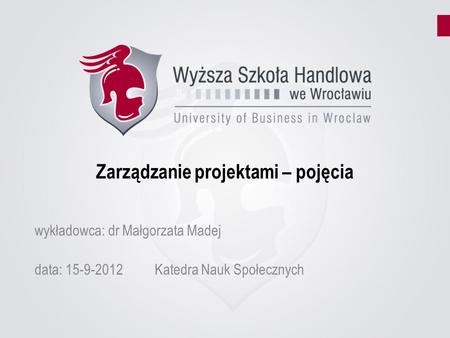 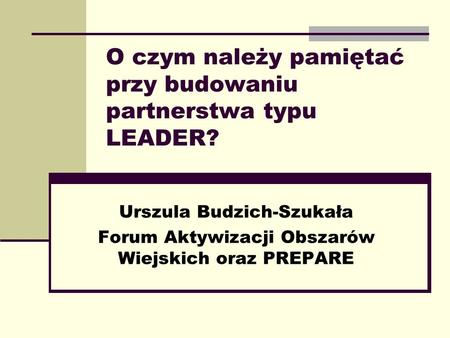 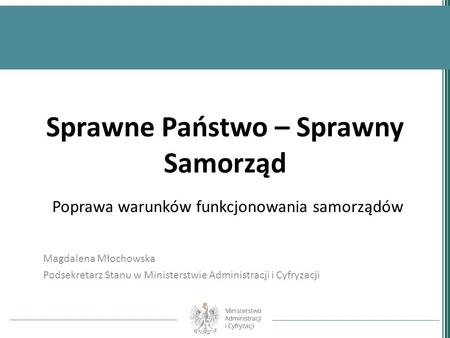 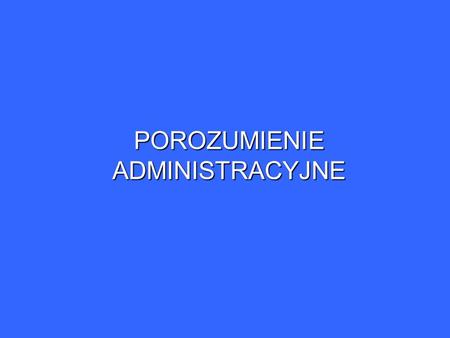 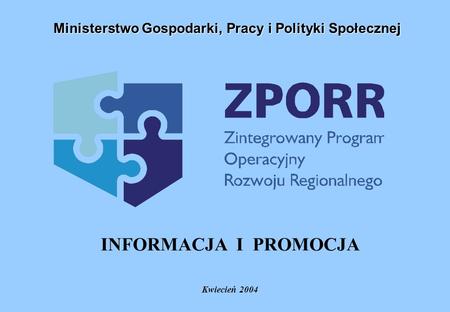 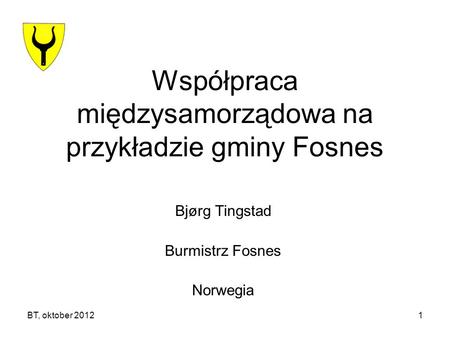 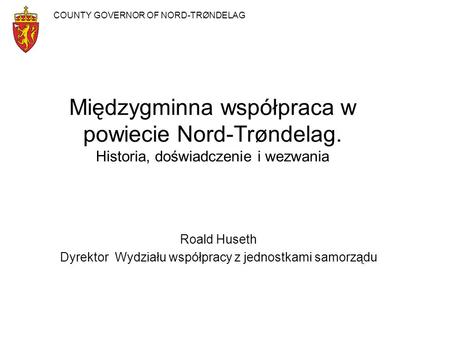 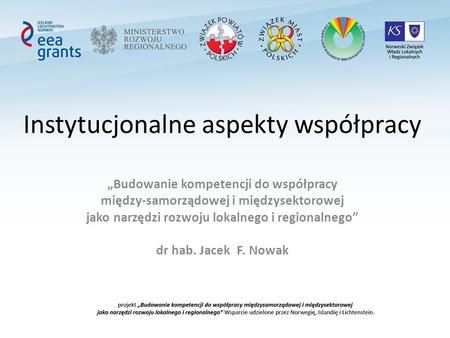 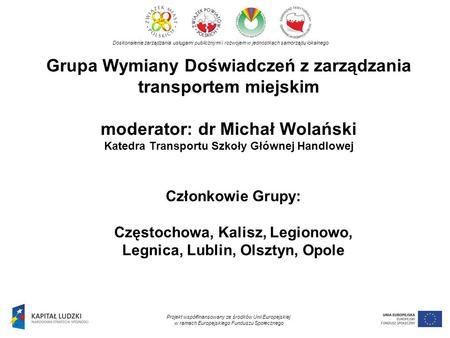 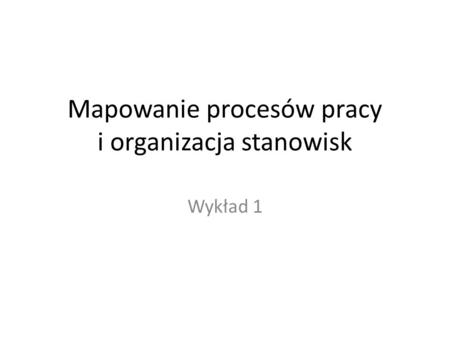 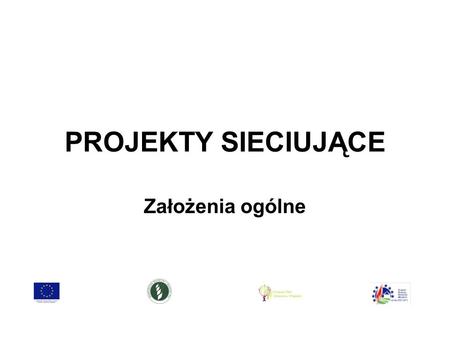 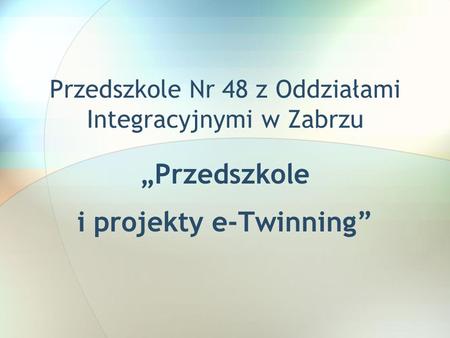 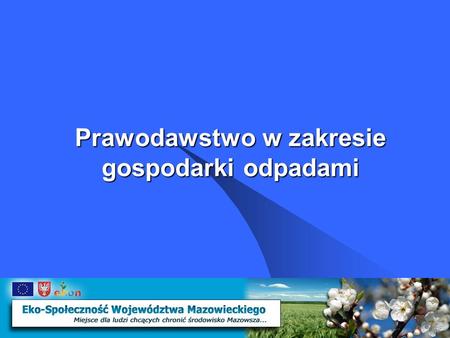 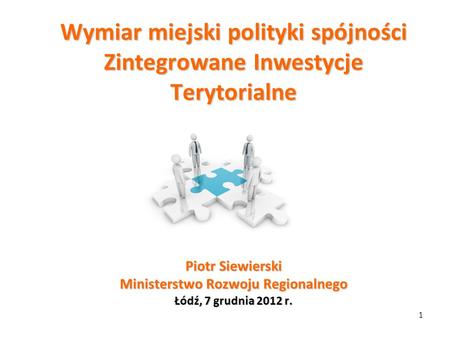 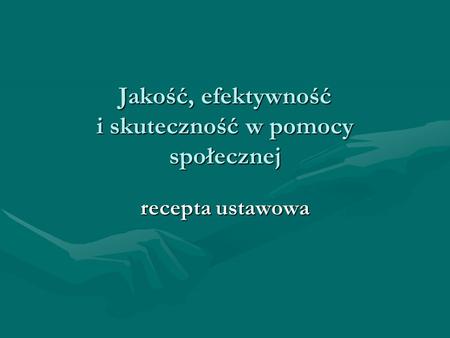